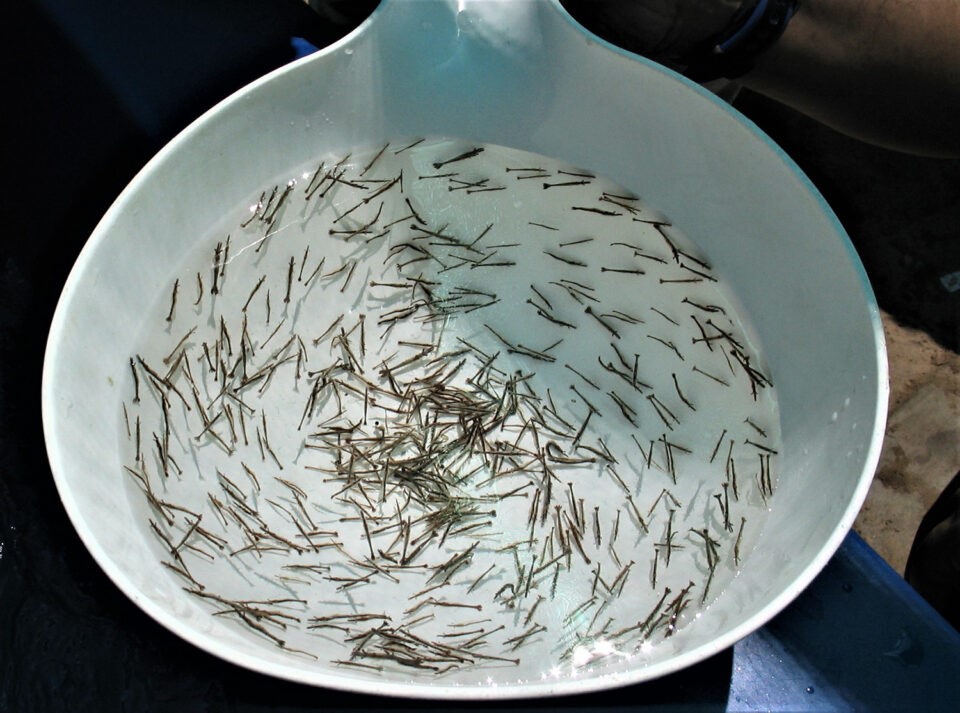 This study evaluated microbial colonization in the early developmental stages of the black tiger shrimp (Penaeus monodon). Results show that bacterial diversity became relatively stable once the shrimp developed to postlarvae, and that microbial colonization in developing P. monodon could be shaped by different host developmental stages, diets, physiology and immune status. Photo by Darryl Jory.

The black tiger shrimp (Penaeus monodon) is one of the most important farmed and traded shrimp species, with high market demand and price. Our research team has recently initiated efforts to define the intestinal bacteria in P. monodon and the interactions with their host, and we have already deciphered bacterial diversities from shrimp intestinal samples from different farm locations covering different habitats and various life stages, from postlarvae to adults.

We believe that better understanding of the P. monodon microbiome [collection of all microbes – including bacteria, viruses and fungi – that naturally live on and inside animals] will pave the way for improved disease control and sustainable farming of the species. Several studies have reported that the bacterial community and individual bacteria species can play a role in larval survival regarding quality assessment and shrimp larval development, particularly the development of intestinal immunity. In addition, several probiotics applications have shown promising results in reducing mortality. Their mode of action is likely related to immune modulation and/or antagonistic inhibition of pathogenic organisms.

To develop prebiotics and probiotics effectively, an understanding of the baseline community from the early life stages of shrimp is necessary. Particularly, newly hatched shrimp possess a sterile, immature digestive system before they further mature into the larval stages of nauplius, zoea, mysis and postlarvae. After the nauplius stage, P. monodon begin to feed on microalgae or live feeds, which permit bacteria from external sources to start to flourish in the host intestine.

In other animals, the interactions between the host immunity and non-pathogenic bacteria during the early life stages is crucial for the further development of immunity. Such interaction is deemed to also exist in shrimp because their immune system during early life in hatchery is often still developing to their full potentials. Therefore, the early life stages will be a prime period when the application of feed additives, such as probiotics, could help establish healthy gut bacteria.

This article – adapted and summarized from the original publication [Angthong, P. et. al. 2020. Bacterial analysis in the early developmental stages of the black tiger shrimp (Penaeus monodon). Sci Rep 10, 4896 (2020)] – reports on a study to characterize the baseline bacterial community associated with the early life stages of P. monodon, to support improved hatchery feeds and management.

Black tiger shrimp were reared at the Shrimp Genetic Improvement Center (SGIC, National Science and Technology Development Agency, Surat Thani, Thailand). Each shrimp family was maintained in a 200-liter fiberglass tank and fed with diets based on their life stages. Zoea stages were fed with microalgae (Thalassiosira sp. and Chaetoceros sp.) until they reached the mysis stage. Mysis shrimps were fed with boiled artemia and microalgae. Once reaching the postlarval stage, shrimp were fed with live artemia in combination with commercial feed.

Shrimp samples from each family (A, B) were collected when they reached nauplius, zoea, mysis and postlarvae stages, as shown in the schematic diagram in Fig. 1. Due to small sizes of the shrimp larvae, pooled samples were collected. All shrimp samples were washed twice in sterile distilled water to minimize carried-over contamination from rearing water.

For detailed information on the experimental design and animal husbandry; DNA extraction and purification; gene amplification and sequencing; quantification of bacterial abundance; microbial community analyses and other analyses performed, refer to the original publication.

In recent years researchers have reported on the important roles of the host microbiome in digestion, enhancement of the immune system and development in aquatic animals including shrimp. Hence, one of the main strategies to reach sustainable production and disease control in aquatic animal farming is to better understand the host-microbial community relationship. The characterization of microbial establishment in their early life stages is particularly crucial due to their potential benefits to promote healthy gut microbial balance from the young stages. Our research group is involved in efforts to investigate the bacterial community associated with P. monodon under various conditions, and here we present the first report on bacteria associated with early life stages in P. monodon from nauplius to zoea, mysis and postlarvae.

In this study we provide the first evidence of P. monodon microbiota established during the early life stages. We identified 30 common operational taxonomic units, OTUs [an operational definition used to classify groups of closely related individuals; commonly used to categorize bacteria based on sequence similarity] belonging to Proteobacteria, Bacteroidetes and Planctomycetes, suggesting the existence of bacterial establishment through the P. monodon development from fertilized egg to adult. These common bacterial members were consistent with previous reports that Proteobacteria and Bacteroidetes were discovered as indigenous bacteria in juvenile shrimp. However, the host-bacteria interactions in P. monodon still require a much further investigation to obtain a better understanding of their relationships and potential benefits to the animal host.

We also documented the association of the phyla Proteobacteria, Bacteroidetes and Actinobacteria with P. monodon at early life stages. These dominant phyla are known as typical microflora in various aquatic organisms (Fig. 2). Our results also showed that Vibrio was the most dominant genus in all shrimp stages, which was consistent with data reported by other researchers, and reported as a dominant bacterium persisting through shrimp metamorphosis.

Within Bacteroidetes, Tenacibaculum was the most dominant and has been reported to mutually exist with marine planktonic diatoms Chaetoceros sp. and Thalassiosira sp. which were fed to shrimp at the zoea and mysis stages in our study. Hence, a higher relative abundance of Tenacibaculum specifically during these two stages suggests that it could be a transient population. Additionally, Planctomycetes was identified as one of the dominant phyla during the early life stages: these bacteria have important roles in aquaculture systems, removing undesirable nitrogenous compounds like ammonia and nitrite. 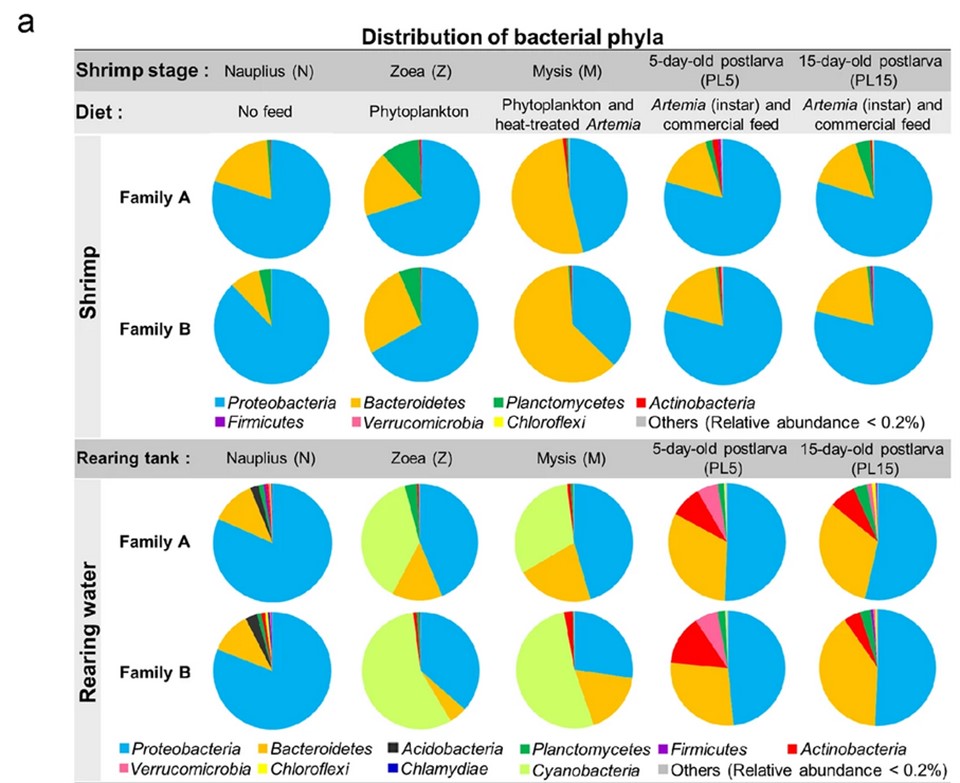 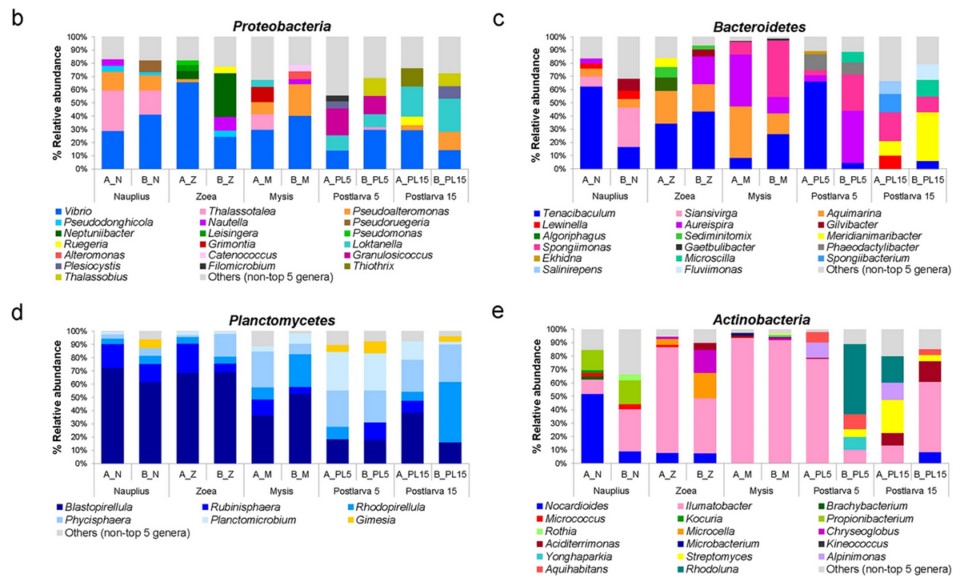 Fig. 2: Dominant bacterial communities associated with shrimp and rearing water. Shrimp samples and rearing water were collected at nauplius (N), zoea (Z), mysis (M), 5-day-old postlarval (PL5) and 15-day-old postlarval (PL15) stages from two families (Family A and Family B). Distribution of bacterial phyla associated to shrimp and their rearing water with their relative abundance greater 0.2 percent were shown and those with their abundance less than 0.2 percent were grouped as other phyla. (a) Stacked bar plots represent the top 5 dominant bacterial genera associated with shrimp from each family at each life stage from each phylum, Proteobacteria (b), Bacteroidetes (c), Planctomycetes (d) and Actinobacteria. (e) Non-top five genera were shown under other genera. Adapted from the original.

Host factors are responsible for the establishment of microbiota in animals, including shrimp. Our results showed that developmental stages were a major factor that affected the microbiota composition. While the bacterial communities of P. monodon associated with the postlarval stage (5- and 15-day old postlarvae) were similar, those from the earlier stages of nauplius, zoea and mysis were different. This drastic shift in the bacterial composition could be explained by the host physiology and change in diets required at each stage. Like other crustaceans, shrimp undergo metamorphosis through the following stages: egg, nauplius, zoea, mysis, postlarva, juvenile and adult. Progression of shrimp through their life stages also entails the difference in their physiological development and corresponding feed requirements.

In our study, when shrimp eggs hatched into the first larval stage (nauplius), they fed on their reserves for a few days before developing into the zoea stage, where they were primarily fed with phytoplankton. Shrimp mysis were additionally fed with heat-treated, brine shrimp artemia and phytoplankton. Once they entered the postlarval stage, their main diets comprised live artemia and commercial feed pellets.

Apart from the animal host factors, environmental conditions can essentially regulate microbiome composition, and have been shown to exert a stronger influence on animal microbiomes than host genetics. Increasing evidence is highlighting a strong link between shrimp rearing environments (e.g. location, wild, farm and laboratory conditions) and microbial diversity. Our study also demonstrated that the rearing environments could considerably shape the bacterial compositions in P. monodon shrimp, as well as their developmental stages. Hence, microbial modulation through farming management, such as probiotics application and water conditioning, could be used to enrich specific microbiome composition as a feasible means to unlock a better growth performance or disease resistance.

Common bacteria could be earmarked as potential candidates for probiotic development, as they are natural microflora that reside within the host, allowing for a sustainable administration and successful colonization in host shrimp. For instance, Vibrio and Pseudoalteromonas established since the nauplius stage in our study are commonly found in aquatic environments, and some strains have already been reported for probiotic value against pathogenic bacteria.

However, V. alginolyticus, also identified among the shared microbiota by our analysis, has previously been proposed as a probiotic candidate. Therefore, some Vibrio sp. should be utilized as potential probiotics in shrimp farming with care, as some related species (V. harveyi and V. parahaemolyticus) might become pathogenic in shrimp under unfavorable conditions like high organic matter levels, poor farming management or immunocompromised conditions of the host. Similarly, some species of Pseudoalteromonas are of concern as pathogenic bacteria while others have been used as probiotics in various marine organisms including blue shrimp (L. stylirostris).

However, further comparisons of microbiota associated with the early life stages of P. monodon from different shrimp farms will be necessary to characterize the core microbiome shared by this shrimp species.

Our results demonstrated that bacterial communities associated with P. monodon during the shrimp’s early life stages could be modulated by life stages through host physiological differences and diets. Our findings offer the first insights into bacterial establishment and assembly in the early life stages of P. monodon where the rearing environment plays minimal roles on influencing the shrimp microbiota. This fundamental knowledge will support the sustainable development of probiotics or feed additives for aquaculture that will contribute to improved survival rates and nutrient absorption in P. monodon farming.

Additional future research on host-microbiota interactions will be necessary to completely understand the dynamic of bacterial communities at different life stages and how they play roles on the well-being of this shrimp species.