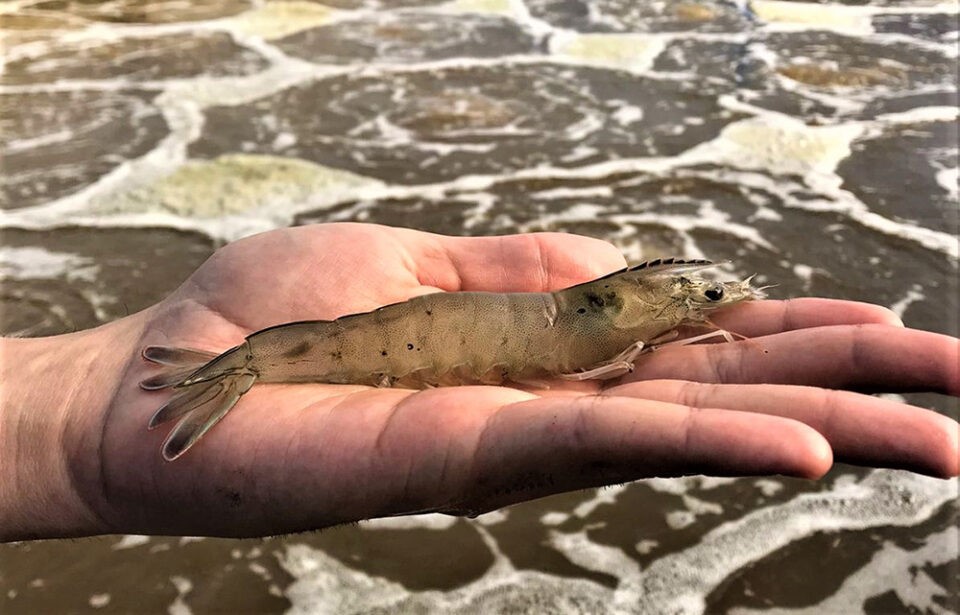 This article reports on recent research by Prof. Wasielesky and co-workers on improved feeding management for cultured shrimp in biofloc technology systems. The objective is to improve on established, more traditional feeding protocols and determine if it is possible to increase the feeding efficiency through strict monitoring of feeding protocols. Photo by Dr. Lucélia Borges.

Southern Brazil is a region characterized by fluctuating water temperatures, with a cold winter and a warm summer. For this reason, it is only possible to culture shrimp during a few months each year. However, temperatures can also fluctuate significantly between autumn and spring, thus increasing the difficulty of achieving good, productive shrimp farming cycles.

The Pacific white shrimp (Litopenaeus vannamei) is known to have its best growth potential between 28 and 30 degrees-C under conventional farming systems. This potential can be achieved not just because an adequate temperature range, but as the sum of many factors including water parameters and feed management. Feed management has a great influence when trying to achieve the best performance, and in the case of biofloc technology (BFT) systems it is common to seek a reduction in the feed conversion factor. However, because feed is the most expensive input in aquaculture production, strict feed and feeding management are necessary to obtain the highest yields and profitability possible.

There are many potential feeding protocols that can be used as a baseline when starting a shrimp farming cycle, and we recommend selecting the one that best fits the farmer’s needs. Among publications relevant to traditional shrimp culture practices, Jory et al. (2001. A global review of shrimp feed management: Status and perspectives. The New Wave, Proceedings of the Special Session on Sustainable Shrimp Culture, Aquaculture 2001. 104-152.) and Tacon et al. proposed feeding regimens based on water temperature, while Garza de Yta et al. based their feeding protocol on the expected weekly growth of the shrimp. In contrast, the management of shrimp feed applied in BFT shrimp culture has not been adequately studied, mainly because it is known that shrimp will use the biofloc in the water column as supplementary feed, and therefore the feed conversion rate (FCR) typically decreases substantially in BFT systems. In addition, restrictive feeding has been recommended to produce the most efficient use of feed and to maximize FCR.

In this article, we report on our recent research on adjustments to the feeding management in BFT systems in order to improve on established, more traditional feeding protocols, and determine if it is possible to increase the feeding efficiency through a strict monitoring of feeding protocols.

Shrimp with an initial average weight of 1.2 grams were stocked at a density of 300 individuals per cubic meters. The experiment lasted 10 weeks, and during that time the water temperatures were maintained using 300-watt heaters and monitored daily. Dissolved oxygen, pH and salinity were also monitored daily, while ammonia, nitrite, nitrate and alkalinity were monitored twice a week.

Mature biofloc from another tank was inoculated into the experimental tanks at the beginning of the experiment at 10 percent of total tank volume. The carbon:nitrogen (C:N) ratio used for biofloc maintenance was 15:1, and when needed, molasses (36 percent C) and hydrated lime were applied to keep alkalinity at adequate levels.

The initial feeding rate was calculated as recommended by Jory et al. (2001) and was adjusted daily through the use of feeding trays. The commercial shrimp feed used (Guabi™) contained 38 percent crude protein. Every day, leftover feed was collected and then dried for accurate calculations of FCR. Every week, 30 shrimp were collected from each tank and weighed to estimate weekly growth. At the end of the experimental period, all remaining animals were weighed order to obtain final weights, survival and productivity for each experimental treatment.

Our results showed that some water quality parameters – dissolved oxygen, alcalinity, ammonia, nitrate and nitrite – differed significantly between the experimental treatments, as a consequence of the different experimental temperatures we used. Regardless, none of these water quality parameters reached values that could have affected juvenile shrimp growth except for water temperatures. 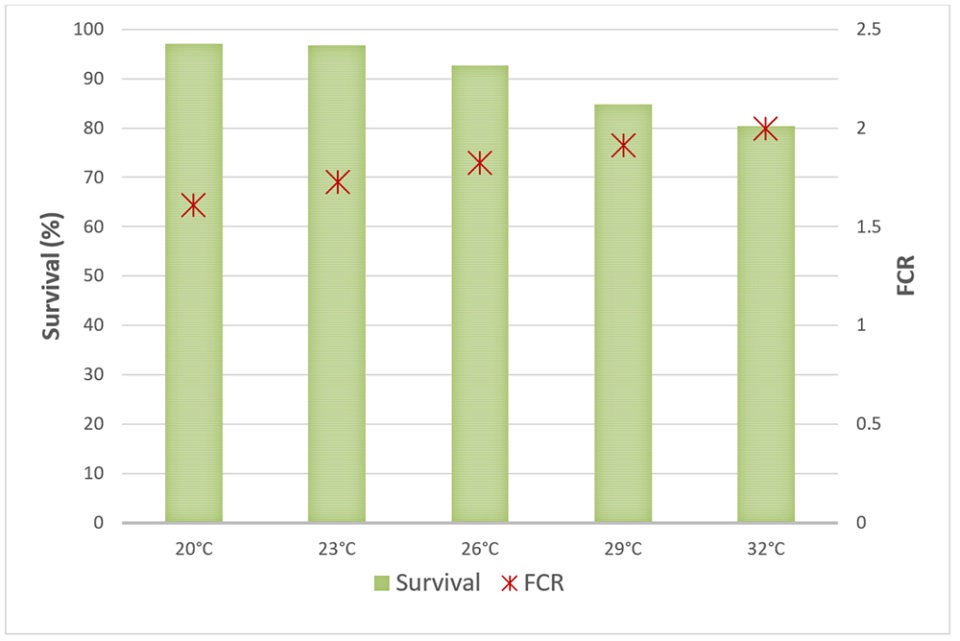 The shrimp from treatment temperatures 29 (best) and 32 degrees-C showed significant final growth gains when compared to the treatments at 26, 23 and 20 degrees-C, as expected (Fig. 2). What was interesting in these results is that the average weekly growth gains corresponded to the same pattern of final weight under a constant temperature.

Also, as shown in Fig. 2, the weekly growth in each treatment in general presented cyclic growth for all experimental temperatures tested, but it is clear that temperature limits the maximum growth that shrimp can achieve at each experimental treatment. Therefore, it is important to create a feeding protocol that matches the capacity of the shrimp at different culture temperatures. For example, in our 26 degrees-C treatment, the shrimp reached an average weekly growth of 0.7 grams, and offering the animals additional feed above the amount used would only result in wasted feed, decreased water quality and economic loss. 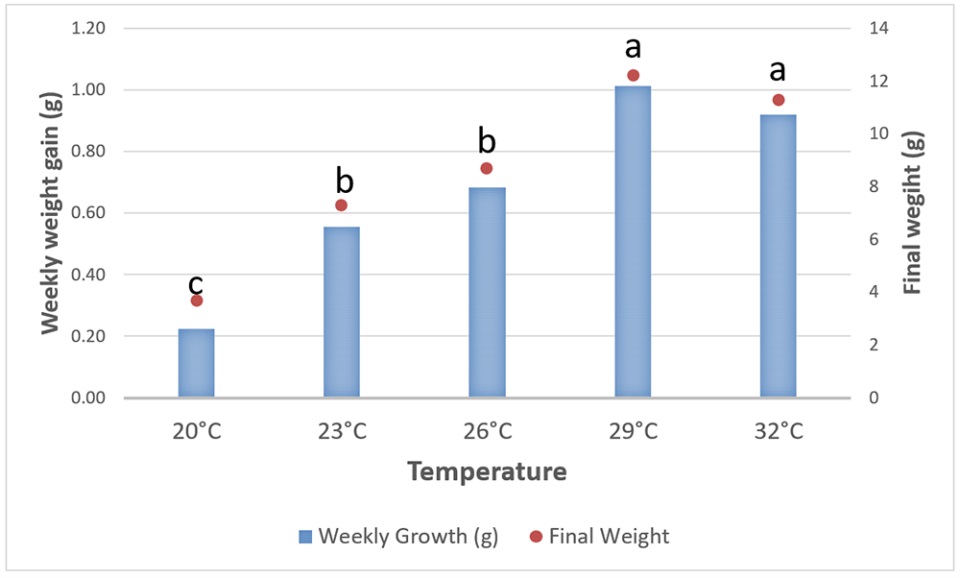 Based on our results, we propose a modification of the feeding calculations proposed by Garza de Yta et al. (2004). Our approach uses the expected weekly growth to reach the maximum efficiency while trying to minimize economic losses related to feeding (Table 1). The table includes correction factors based on water culture temperatures in the production system. 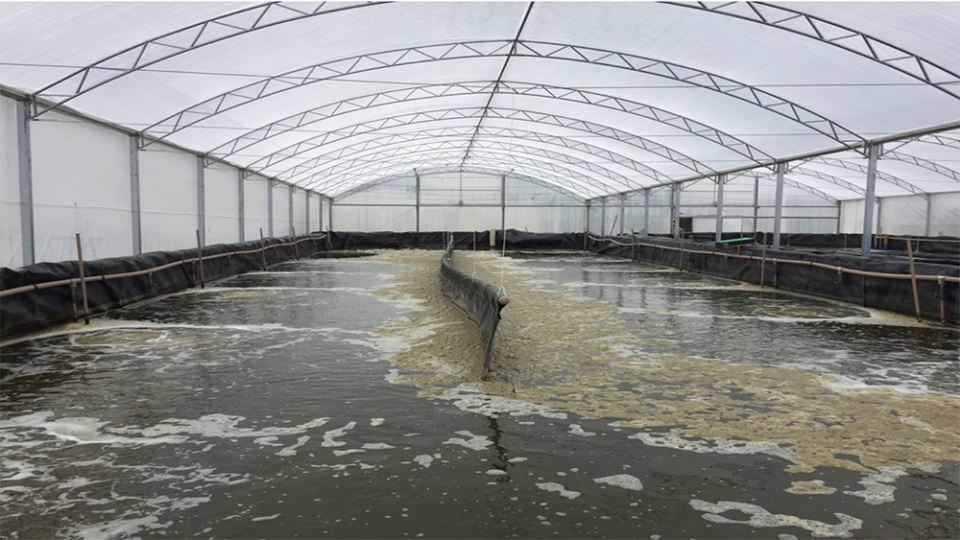 Based on our results, we believe there is ample opportunity to improve feeding protocols of shrimp cultured in BFT systems, especially in regions with significant water temperature fluctuation. We also observed that our experimental animals reared at 32 degrees-C showed decreased growth efficiency and therefore recommend lower culture temperatures within the range we evaluated. Finally, we believe the proposed correction factor to improve shrimp feeding protocols considering water temperatures in biofloc production (BFT) systems should maximize shrimp production efficiency in BFT systems.