Importance, Optimisation of Trace Minerals in Shrimp/Fish Nutrition for Development of Immunity

Application of feeds in aquaculture can increase both production and profits considerably. Dr Seshaiah V. Pamulapati and Prakash Chandra Behera, PVS Group, India, discuss how trace minerals are having greater role in shrimp nutrition along with other minerals for healthy shrimp/fish body and better production.

Nutrition encompasses the chemical and physiological process which provides nutrients to an animal for normal function, increase in immunity, disease resistance, maintenance and growth. It involves ingestion, digestion, absorption and transport of nutrients and removal of waste. There are 20 recognized inorganic elements which perform essential functions in body. Some minerals are required in considerable quantities and termed Macro-elements while others which are required in lesser amounts are referred to as Micro-elements (Trace Minerals). The micro elements (Trace Minerals) are having greater role in shrimp nutrition along with other minerals for healthy shrimp/fish body and better production.

Aquaculture has been developed extensively in high stocking density with increased production level. The pond natural food resources are unable to provide the required nutrition to shrimp/ fish under commercialization culture practice. The available soluble nutrition in water is not sufficient for fast body growth of animals with in limited culture period. The additional balanced diet is required to provide as feeding to overcome the nutrition deficiency of culture shrimp/fish. The supplementary feeding is highly essential and it is having major share in this culture. The minerals including trace minerals are playing major role in nutrition for various functions of body and growth for semi-intensive/ intensive culture. The enriched trace minerals dietary composition have a significant impact on immune functions, disease resistance, and stress free of shrimp/fish. Most nutrient requirements of cultured animals have been determined in pond environments where disease and stress have been minimized.

General function of minerals includes constituents of the exoskeleton, balance of osmotic pressure, structural constituents of tissues and transmission of nerve impulse and muscle contractions. Minerals serve as essential components for enzymes, vitamins, hormones, pigments, and co-factor in metabolism, catalysts, and enzyme activators. Shrimp can absorbs or excrete minerals directly from the aquatic environment via gill and body surfaces. So, the dietary requirement of minerals is largely dependent on the minerals concentration of the aquatic environment in which the shrimp is being cultured.

The micro-elements or trace minerals, such as chromium, cobalt, copper, iodine, iron, manganese, molybdenum, selenium and zinc, are required in small quantities and participate in a wide variety of biochemical processes . They are involved in cellular metabolism, formation of skeletal structures, maintenance of colloidal systems, regulation of acid-base equilibrium, immunity enhancer, stress releaser, disease resistance and other physiological functions. They are important components of hormones and enzymes, and serve as cofactors and/or activators of a variety of enzymes. 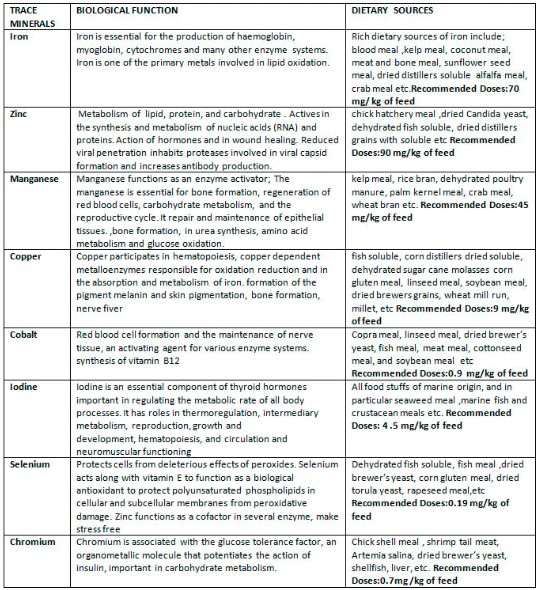 Role of Trace Elements on Immunity of Shrimp / Fish

Dietary bioactive food components that interact with the immune response have considerable potential to reduce susceptibility to infectious diseases. A functional immune system is absolutely essential for the survival and performance of shrimp/fish in aquaculture. Each and every trace mineral components are having their specific role in immunity of cultured animals but the crucial trace metals that have been associated with an improvement in immunity or function that support immunity, are Zn, Mn, Cu and Se. The immune system uses several methods to detoxify these foreign agents or antigens. The trace elements that have been combined with an improvement in immunity, or function that support immunity. The micro- elements has especially been strengthened by the importance of their roles in immune defense and antioxidative protection.

In intensive culture, fluctuating environmental and water quality conditions combined with practical husbandry practices can result in the development of stress situations that affect the physiology and micro mineral requirements for the species cultured. During stressful situations, the selenium status is more effectively maintained by an organic form of selenium than by the inorganic form. Stress conditions can also affect the osmotic and ionic regulation in gills. The micro elements are helpful for reducing stress and for disease resistance of shrimps/fishes in aquaculture.

The aquatic animals have a ability to absorb minerals from the surrounding water in addition to the food ingested, and because of their variation in response to salt regulation or osmotic pressure. Fish and shrimp live in a hypertonic environment and drinking salt water may partly fulfill of their mineral requirements (NRC, 1983). Also they make with the direct absorption of minerals through the gills, fins and skin. The situation in freshwater fish and prawns is the reverse. Freshwater fish and prawns are therefore more demanding on an adequate dietary mineral supply than marine fish and shrimp (Cowey and Sargent, 1979). The dietary requirement of a fish or shrimp species for a particular element will depend to a large extent upon the concentration of that element in the water body.

The bioavailability and tissue storage of trace minerals are of primary importance in their nutritional performance. Minerals chelated to organic molecules have higher bioavailability than their corresponding inorganic forms and interact less with each other in the digestive tract. Amino acid chelates of cobalt, manganese and zinc are more readily available than their inorganic salts. The organic chelate zinc methionine has been estimated as three times more potent than the inorganic sulphate. The organic forms can greatly enhance the absorption of an element by either releasing the element or being absorbed as an intact chelate. Chelated minerals are less sensitive to the inhibitory action of other compounds because of their reduced solubility in water. The increasing bioavailability and effectiveness of organic micro elements forms can dramatically reduce the required inputs and decrease waste discharges to the environment.

Symptoms on Mineral Deficiency in Fish/Shrimp

A major hazard which may be associated with the use of dietary feed ingredients is the presence of potentially toxic mineral elements such as the accumulative elements copper, lead, cadmium, mercury, arsenic, fluorine, selenium, molybdenum and vanadium. Dietary toxicity signs have been reported in fish and shrimp include toxicity sign:

Nutritionally complete diets are necessary in culture situations and, therefore, micronutrients must be supplied in adequate levels in the prepared diets to support optimal growth and production efficiency. This is particularly true in intensive situations, where immune competence and disease resistance can be substantially compromised by deficiencies of various nutrients, especially vitamins and micro minerals. Dietary supplementation of some of these micronutrients in excess of minimum requirement levels has been shown to have a positive influence on immunity, as well as resistance to and recovery from disease.