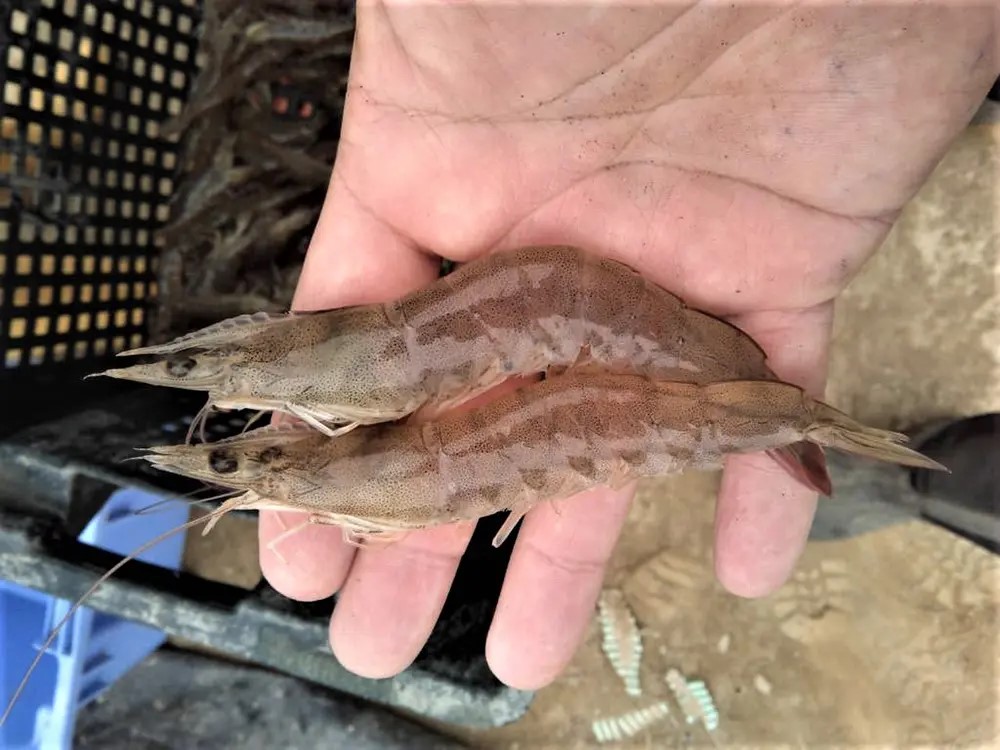 This is the first reported successful electrochemical detection of White Spot Syndrome Virus – one of the most important pathogens of farmed shrimp, with a global impact of billions of dollars – using a novel, disposable electrode. Photo by Fernando Huerta.

The White Spot Syndrome Virus (WSSV) infects shrimp and causes White Spot Disease (WSD), which is considered one of the most lethal and costly virus pathogens in the cultured shrimp industry globally. Vaccination is always the most useful method for solving any viral infection, and a few attempts to induce an immune response and protect shrimp from WSSV infection have already been reported, But the results of these vaccination attempts are still poor considering their practical use. To avoid the risk of WSD in shrimp farming, it is important to have the means to quickly identify any infected shrimp.

Current methods for detecting WSSV rely on polymerase chain reaction (PCR, a method widely used to rapidly make millions to billions of copies of a specific DNA sample) techniques using viral DNA or protein assays using a specific antibody, with a limit of detection, LOD (the lowest quantity of a substance that can be distinguished from the absence of that substance with at a  confidence level of generally 99 percent) of a few hundred DNA copies per mL within four to 12 hours. Diagnostic PCR assays for use in aquaculture are limited by their cost and requirement of highly skilled operators. Other WSSV detection methods include other sophisticated techniques like dot blots, lateral flow assay and enzyme-linked immunosorbent assay (ELISA).

Nanomaterials [materials with a single unit sized – in at least one dimension – between 1 and 100 nanometers (a unit of length in the metric system equal to one billionth of a meter, or 0.000000001 meter)] with unique physical, optical and electrochemical properties have been successfully used for high-sensitivity detection of various viruses. Electrochemical impedance spectroscopy (EIS) is a sensitive technique for the analysis of the properties and recognition of various molecular reactions, and through biosensors can directly detect various molecular events. For example, we have demonstrated the detection of hepatitis E virus with a manufactured biosensor electrode constituted by specific antibodies and nanomaterials based on an engineered impedimetric process.

This article – adapted and summarized from the original [Takemura, K. et al. 2020. Electrochemical detection of white spot syndrome virus with a silicone rubber disposable electrode composed of graphene quantum dots and gold nanoparticle-embedded polyaniline nanowires. J Nanobiotechnol 18, 152 (2020)] – reports on a disposable electrode that can accurately detect WSSV and can have important applications in the aquaculture industry.

For detailed information on the highly technical process, equipment and materials used to manufacture the testing electrode – including the nanocomposite deposition on the sensor electrode as well as WSSV collection and pretreatment, and the detection of WSSV using the disposable electrode – refer to the original article.

The disposable electrode we developed demonstrated during its testing a capability for detecting WSSV over a wide linear range, with high specificity and sensitivity. The sensor stability was also tested over more than one month to confirm its applicability for on-site virus detection.

The electrical impedance (measure of the opposition that a circuit presents to a current when a voltage is applied) plot of the disposable electrode after incubation of different concentrations of the virus from 102 to 109 copies per mL are shown in Fig. 1a. The responses of the sensor electrodes increase with the concentration of WSSV due to the high resistance accumulation at the virus-loaded electrode. When WSSV binds to the sensing electrode, a large number of non-conducting virus particles cover the conducting surface, increasing the resistance.

The calibration plot displays an excellent linear relationship between the resistance and the WSSV concentration (Fig. 1b). The limit of detection, LOD, was determined to be as low as 48.4 copies per mL – an extremely low and sensitive value with practical use. After the WSSV detection, the surface of the virus-loaded electrode exhibited a significantly increased roughness, indicating the presence of WSSV on the electrode.

Fig. 1: WSSV detection using the disposable electrode. (a) Resistance plots for different concentrations of WSSV. Axis values in ohms, units used to measure electrical resistance. (b) Calibration curve of the corresponding impedance. The charge resistance value (Rct) is a measurement relevant to corrosion electrochemistry and electrochemical reactions. Each detection was performed three times and data are given as average ± SD (n = 3).

We compared our sensing performance with various other WSSV detection methods. Many studies have successfully detected DNA, but it is not easy to implement on-site and rapid detection because of the need to extract DNA from the WSSV. Our detection system is practical because it shows high sensitivity, simplicity and adaptability for on-site detection.

Regarding the selectivity and stability of the disposable electrode, and to confirm the specificity towards WSSV, various other viruses and some materials were also tested during our study with the sensor electrode. The sensor responses, except for WSSV, Fig. 2a), were similar to that of the bare electrode, indicating the sensor specificity for the target virus. The high selectivity of the sensors was achieved by its special coating with various materials and its effective cleaning. When many foreign substances were present and the non-specific adsorption occurred on the sensor surface, the substances other than the target WSSV were removed with a highly efficient washing solution, resulting in the high selectivity of our detection method.

The stability of the disposable electrode was tested for eight weeks to observe its applicability for long-term usage. As depicted in Fig. 4b, the signal intensity after loading of 104 copies per mL of the virus remained at 86 percent until day 35. However, it dropped to 73.4 percent after 56 days of storage due to degradation of the antibody used.

Fig. 2: (a) Selectivity test of the electrode coating used for WSSV detection compared with non-target viruses and various ions and other substances. (b) Stability test of the disposable electrode. The electrode was stored in the refrigerator for 56 days, and the detection performance was tested every week from the second week. Adapted from the original.

After successful detection of WSSV in a buffer medium, virus samples were collected from 10 WSSV-infected shrimp and tested. Their DNA copy numbers were compared with the results obtained from this electrochemical detection technique. The overall trend of the PCR results for the samples showed outstanding similarity to the trend of the electrochemical sensor results, confirming the reproducibility of the sensor’s results. Overall, our data show that our sensing system has a higher sensitivity, by six to seven orders of magnitude, than other currently used testing techniques for WSSV like western blot, and can detect WSSV from infected animals in less than 20 minutes.

We developed and validated a disposable electrode for the rapid and sensitive detection of the White Spot Syndrome Virus (WSSV) within 20 minutes. During testing, our sensor detected the virus over a wide linear range from 102 to 109 DNA copies per mL, with a limit of detection of 48.4 copies per mL. And the functionality of the disposable electrode was successfully demonstrated to have high selectivity and long-term stability for about five weeks.

The sensing capability was also successfully tested for other viruses, suggesting its versatile applicability for future usage. The sensor was applied to detect the virus from WSSV-infected, aquacultured shrimp, and found to be comparable with currently used PCR analysis, which confirmed its applicability as an excellent monitoring system for real-time virus detection.

This is the first demonstration of the detection of WSSV by a nanofabricated sensing electrode with high sensitivity, selectivity and stability, suggesting its potential as a diagnostic tool to monitor WSSV in the aquaculture industry. This detection system could play an important role in controlling the spread of WSSV for on-site detection systems at shrimp production facilities.